Alright, I’ve stated my gripes about things that I cannot stand about Ancestry. However, I feel that to be fair I should share this with you: 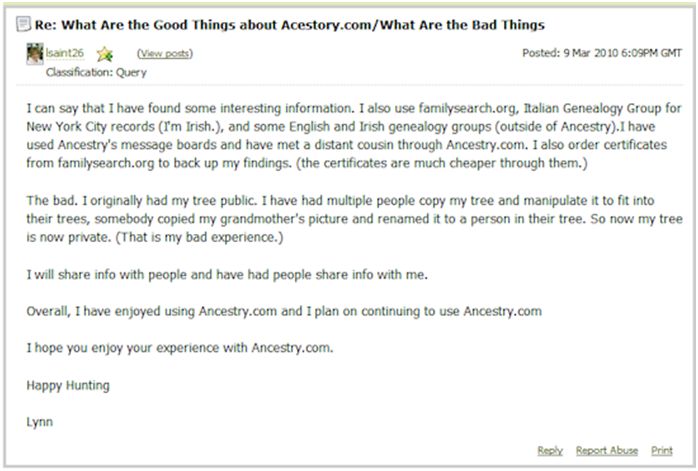 Her bad experience was also my bad experience, along with hundreds of others who where victims of the same thing. Lazy genealogical plagiarism! Only this is of the worst kind, genealogical identity theft. Why would someone take a picture and reattached to it someone by a completely different name? I had a cousin who felt it was her given right to copy everything I had and display it for the world. All of my work was original and unique. In fact, until I started doing my own, it was no where to be found on any tree anywhere. Now, sadly, that information has been twisted into something unrecognizable. I had a girl from southern Ohio email me asking to see all of my pictures, sources, etc., because she just knew that we shared the same grandfather back a few generations. Since I know who all of the living descendents are of my clan, I knew this girl missed her mark by a long shot. I looked at her public tree and found my pictures attached to people that weren’t even related. It was such a misconstrued fantasy that I did little to be more than one step past kind. I explained to her everything she did wrong, why all of her sources were wrong, why my pictures are copyrighted and to be removed immediately, a list of people to remove as well, and scolded her not reading any of the census records. (She claimed she did read them, but it was so painfully obvious she didn’t.)

Amid all of the other things that you’d have to deal with as a user and a newbie (green horn, inexperienced person) in genealogy, the very fact that people rip off things like misinformation and it spreads like the plague. Oh, the horror and tragedy of it all! (And to think, the perpetrators that actually have the audacity to do this call themselves ‘genealogists’.)

Now, I was not intending to do this segment on things I had already covered, but I couldn’t help but to share that poor woman’s dilemma. I actually had a lady a couple years ago who came across some of my posts on Ancestry and she emailed me. We got to talking on the phone for a couple of weeks and this had a similar complaint to this. (What truly blew my mind was she sent me a rather large package in the mail one day. It was all of her research. She was looking for the right person to pass it along to. I wasn’t a relative to this family, but we had cousins in common and she knew I would handle it properly. She then retired and I never heard from her again.) I related their work akin to watching Disney’s Pocahontas and writing a history report on it as if it’s factual truth.

Thus we have now cut straight to the chase of the whole matter. The best thing that Ancestry is good is networking and communication. One of my case studies here on my website in my portfolio details one of the most fantastic tales of luck I’d ever experienced. (Case #4, The Adopted Daughter)

If you’ve been following through with Part 1 and Part 2, you’ll know that there is a lot more to be said as a whole, but the things I listed out are personal grievances I have against Ancestry.

Make your information private. If you’re a new person to this, then learn from those who’ve gone before and suffered at the merciless hands of those uncaring individuals.

Ancestry is great for their census records, networking, and communicating. Even if that communication is years apart, the fact remains that it is still there working for you. It’s a like a message in a bottle. You don’t know if it will ever be answered, but you hope one day it will.

The next segment on this topic will not exactly be on Ancestry, but on other great features that also transfer over to Family Tree Maker.