I have tried multiple times over the last couple days to get this to post. My whole autosave drafts have disappeared.  The backups were missing too. The page would not save, when I tried to publish it, there would be an error and all of my changes wouldn’t save but disappear. I’m tenacious though and I have proven to be successful, regards of the headaches I’ve experienced in trying to publish this. I have written and rewritten this post several times, only I’m too stupid to quit or give up or otherwise throw in the towel. It’s my blog and if I want to post pictures of ghosts and postmortem people, then I will. That being said, enjoy.

In 1959, a Mrs. Mabel Chinnery went to visit the grave of her mother. She brought along her camera for the purpose of taking pictures. (Apparently, photographing headstones is not something new!)

After she was done and on her way back to the car, she did an impromptu and snapped a picture of her husband who was waiting in the car for her. 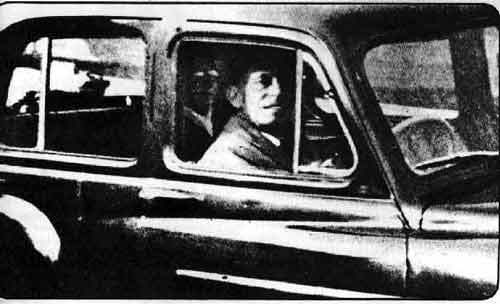 The lady you see in the back seat is the mother of Mrs. Chinnery. The blouse, the jacket, and even her glasses are visible. That is more interesting are the facial features that are visible. Her cheeks, a mouth, forehead, and even the color of her skin could be determined (being Caucasian).

The photos have been examined by experts who declared it was not a reflection or double exposure, making this an authentic picture. I wouldn’t label this as being a postmortem picture, but more of an afterlife photo. 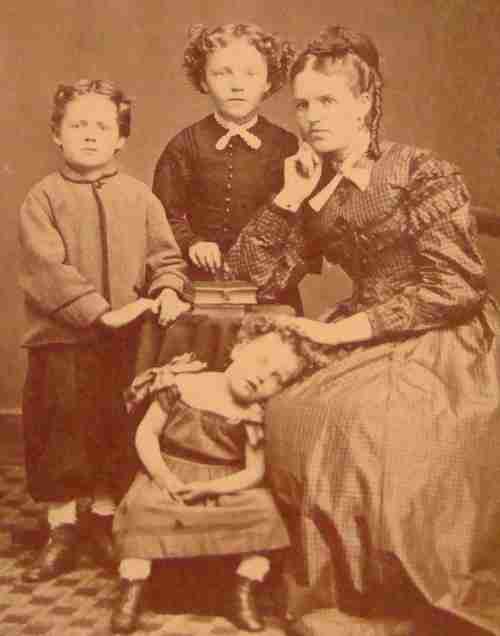 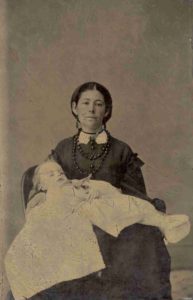 During the Victorian Era (1837-1901) and the invent of photography, another step in our interest in death was taken in the form of postmortem pictures.

These were often done as a part of the grieving process for the people who were still alive. A mother holding her deceased child was probably one of the more common photo poses I’ve seen when it comes to postmortem. Another common setup is the mother and or siblings with the deceased child. Sometimes people were set up into poses with the use of clamps, posts, and very stiff wires.

The pictures were sometimes marked afterwards to show the pupils to make the person look more alive. I’ve seen markings on pictures that I knew of people who were alive but this practice was also done with deceased persons too. 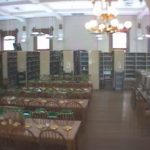 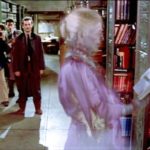 Of the two pictures above, the left one was taken in the Willard Library in Evansville, Indiana. It’s one of the more famous pictures of the ghost that has become known as the Gray Lady. The picture on the right is from Ghostbusters (1984).

You can read about the Gray Lady on the Library Ghost Web Site they also have live cams set up all over the place that refresh every minute. She has been spotted in each of the areas where they have cameras set up.

As a genealogist, we are prone to spending a lot of time in libraries. Just because you may be in a remote part of the library researching, does not mean you are alone. A ghost of an old librarian might be there to assist you or possibly even an ancestor to help you in your quest for knowledge of the family history.

This picture was taken Dec 1891 in the Combermere Abbey Library while the funeral of the Lord of Combermere was being held four miles away. The shutter was left open for an hour and caught the faint image of what appears to be Lord Combermere sitting in his favorite chair. 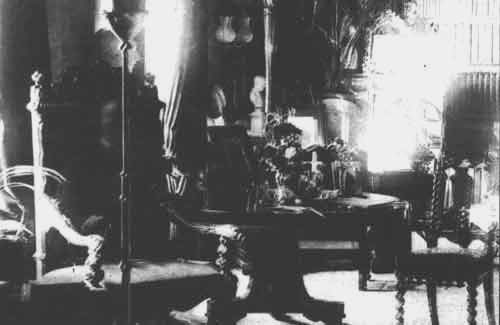 Lord of Combermere was a title, but his name was Colonel Wellington Henry Stapleton-Cotton, 2nd Viscount of Combermere.

You can read more information about him here as a starting point. 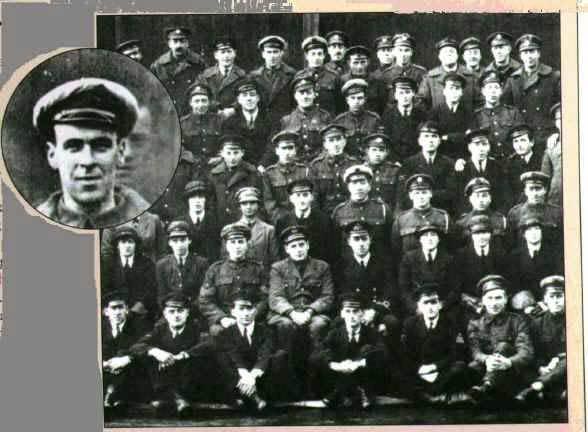 In the cutout is the picture of Freddy Jackson, an airplane mechanic who was killed a couple days prior. His funeral was taking place and while everyone was in dress uniform, a group photo was taken. Sometime later on he was seen.

The photo is owned by Sir Victor Goddard, Royal Air Force officer (ret.). The photo was first publicly seen in 1975 and it was taken in 1919 during World War I.

Since he was killed a couple days prior by an airplane propeller, he may not have been knowing or accepting of his death. His mates identified him for sure.

Here is another postmortem picture of a small child that has died. The thing that I found to be incredibly creepy about this picture in particular is that the baby’s eyes are open.

Other small features that I notice are the curves of the mouth and how its eyes are also sunk in. 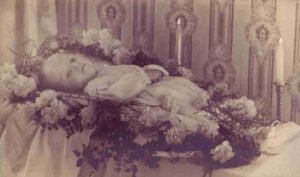 Again, I’m not an expert on Victorian Era mourning practices but of all the postmortem pictures I’ve seen, this to me is one of the creepiest things I’ve ever seen.

This picture shows a family of five that all show trauma from apparently an accident. I can’t really date the picture, but it looks to be from the early 1900’s and it might have been a car accident. 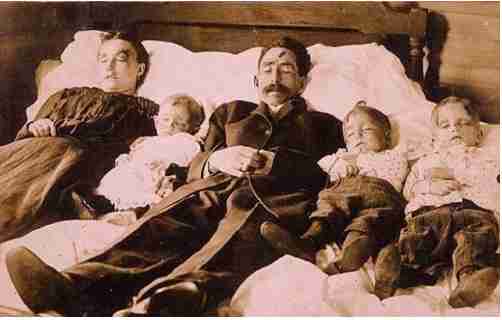 If the open eye dead baby was the creepiest one I’ve ever seen, this has to be one of the saddest. A whole family wiped out from an accident.

I’ve seen a similar pose like when the Dalton Gang was killed in a failed bank robbery. They were laid out in the same manner.

Whether or not you believe in ghosts, residual or intelligent hauntings, or completely avoid the subject of death when it comes to genealogy because it creeps you out, you cannot deny the fact that it is there.

Death is every bit a part of our existence as life is. With each of the different samples under varying degrees, I want you to stop and consider if you have any postmortem pictures of your family but don’t know it. There are very subtle clues that would tell you for sure if the person was deceased when the photo was taken. Research some and examine your pictures. You just might be surprised at what you find within your own collection. Remember that the pictures were taken so that their loved ones could remember what they looked like in their final moments after life. It may be the ​only​ picture of that person.

The next time you walk through a library or a cemetery, just remember that you really aren’t alone. I’d certainly like to believe that on many occasions when I’ve hit my own brick walls that my family was there to give some guidance. My help many times I know came from Divine Intervention, but those are stories for another day.

This is the darker side of genealogy.

0 0 0 0
Previous : Do You Always Tell The Truth?
Next : Missing Family Pictures
Kevin Ralston