Not too long ago, I got up about 4am and decided it would be a good idea to head out the door, grab some breakfast and hit the road early. I had a lot to do and a short amount of time to get it done in. What more perfect time than now to get a head start on the day! I don’t know why I woke up at 4am, I just did.

On my way down the road, I happened to be passing a field. Standing in the field and next to the road is a full grown doe. I thought, ‘oh a deer’. I’ll reserve the right to withhold comment on my next thought.

I don’t know why. I don’t know how. I’m not even sure I want to know. All I do know is that that deer decided to take a flying leap right in front of me. I’m traveling in the left lane on a four lane road. That deer had to cross one entire lane to stop directly in front of me. She had three very empty lanes to pick from and she stopped in front of me.

I was doing the speed limit too and that actually might have been my saving grace. I managed to swerve my agile Cobalt right around this stupid animal, barely missing her by inches. I’m surprised it didn’t knock my mirror off, it was that close.

After thanking God repeatedly for saving my hide from the perils of hitting another deer, my next thought went to my insurance on the car. For quite a while now I’ve carried only basic liability in case I hit someone else or damage property. A quick breakdown of auto insurance goes like this:

–Basic Liability Only: Pays for the repair of car or property of another person that you damage with your car

–Comprehensive: Pays for loss due to theft, nature (a tree falls on your car), or animals (like hitting a deer).

–Collision: Pays for your car and the other person’s car to be fixed.

I think it’s time to up my auto insurance.

This was only one type of animal that I’ve encountered.

A while ago, I was in PA going through a cemetery picking up headstones and taking pictures of them. This is seriously heavy work, if I can lift the stone at all. In one instance, I was able to lift the stone. Now, the weather was cold and I didn’t think anything of it when I saw what looked like a black or purple worm slithering down a little more into the dirt. It struck me as being an odd color for a worm and I took a closer look. The bulbous head clued me in that this wasn’t a worm, but a snake and it was staring at me. Even worse, I was in another State, I was very close to SE Ohio &amp; WV where I know for a fact poisonous snakes live and I didn’t recognize what kind of snake this was! I dropped the headstone back into place and got out of there.

Like Indiana Jones, I have a deep rooted hatred for snakes. They creep me out and I will kill what I can’t avoid. It took a lot of courage, but I did go back to that same headstone, stuck my fingers under it and lifted it again. The snake was gone, but I was still creeped out. I figured that I came to the cemetery to get pictures and I meant to get them!

Other animals that I’ve narrowly avoided are skunks and possums. It’s not uncommon to see them on the out skirts of an old cemetery back in the hills were people rarely go, especially if I’ve been there for a while.

These are just some the dangers that I have encountered. The worst threats are from those of my own kind: humans. Being shot by a random bullet during hunting season (or at any time for that matter) while looking through or for a cemetery scares me. If it’s a fatal shot, it might be a good while before I am found. It’s a flesh wound, getting to a hospital will be a problem. Deep down in the country, I’ve heard these shots echo through the woods and across fields wondering how close they were. I’ve heard old veterans talk about how the shot that gets you, you never hear.

Some people think this research business is easy and safe, but I beg to differ! I know the dangers that range from driving, to animals, to even accidental fatalities that might happen but I love doing this and I won’t ever quit. 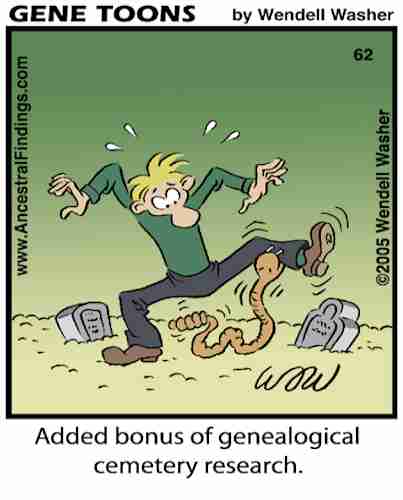 0 0 0 0
Previous : Reality and Research
Next : A Random Act of Kindness
Kevin Ralston