I’m sure that all of have heard the joke about why there are fences around cemeteries. Depending on which version you’ve heard, the punch line is either ’cause people are dying to get in there’ or ‘to keep the dead people in (and the live people out)’. But are you familiar with the security measures some of our ancestors have used to keep their loved ones in the grave?

In the early years of our country, there were wild animals we don’t see roaming about anymore in some places. These included coyotes, wolves, and other predators and scavengers. Even though wolves in most places have been eradicated, coyotes are still roaming about.

Before there were common practices and regulations about how to bury to deceased, their graves were shallow. There were no cement vaults, thick solid wood caskets were rarely use, and mausoleums were very expensive too. Wicker caskets or just sheets were sometimes used. Some mortician practices, such as embalming, where very expensive to have done and not widely available in more rural areas; particularly in the edges of the wild frontier.

Animals have much keener senses when it comes to things like smell and they could smell the rotting corpse beneath the earth. If at a depth of only a couple feet, it wouldn’t take long for them to dig up the body and feast. Yes, feast. They would eat them.

Before there was a ‘donate to science’ option, another problem were the grave robbers who would dig up recently deceased persons and sell them to doctors and medical students. Body snatching, as it was sometimes called, was a real problem in America, Scotland, England, and Europe. Anywhere there was a medical university to train medical students into doctors there were instances of body snatching.

As strange as it sounds, they were faced with a problem of how to keep the dead in their graves. 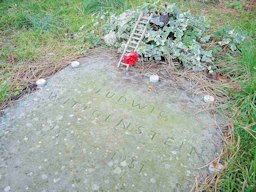 As you can see from this picture, the grave stone is flush on the ground. This isn’t a fallen stone either, it was done on purpose. The main of the this was two fold: it would make sure the wild animals could not dig into the grave and it made it very difficult for a single person to rob this grave.

Something to think about is this. What are the chances your ancestors actually had a grave stone like this, but it has been over grown by grass and weeds? It would make their stone virtually impossible to find unless you’re very skilled at finding these. My own fifth great-grandmother’s stone is like this, but the cemetery is kept up.

Remember that the next time your relative’s burial location is unknown or ‘unmarked’. It very well could be marked, but it’s more a matter of finding it. These were not uncommon in the Ohio Valley.

I’ve seen these kind of cages used in Pennsylvania. Surprisingly, the ones that I’ve seen were not in wild areas. The cemeteries had active churches and the grounds were kept. Like most all of the security used, they were meant to make it difficult for the animals and unwanted persons from entering the grave. This is just one sample of one style used. Some were more ornate and others were very simple. Like all things, it comes down to a matter of money: how much are you willing to spend?  I’ve even seen fences like this where they didn’t have a gate and couldn’t be opened. You couldn’t jump the fence either. 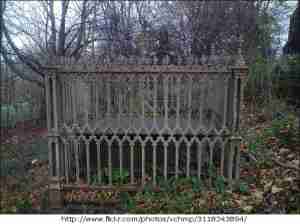 This one here shows a fence and if you look closely, the fence is much taller than normal, has no apparent gate, and it enclosing a n above-ground crypt. The usual height of the crypt was 3 feet. The fence appears to be at least twice that height and it probably close to 6ft in total. It would be very difficult for anything to get into this one.

In West Virginia, I have seen above ground crypts like this, but the lids were pushed to the side. A fence like this does a lot to help keep vandals out too. 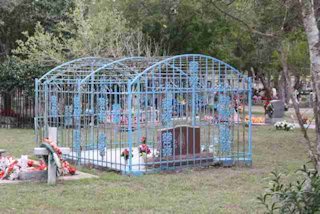 This is one example from Mexico. It’s a full-blown enclosure around a modern day burial site. You can see the granite headstone with what looks like a cemetery floor inside of the cage. 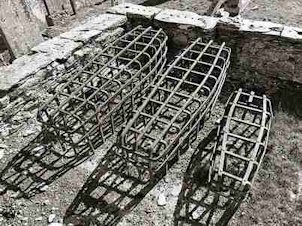 As you can see from these here on the left, they’re individual cases. These were more commonly called a “mortsafe”.

The definition of the root word “mort” is “death”. (A mortgage, where gage means grip is a “death grip” the bank has on you until the note is paid off.) These cages were called mortsafes and were mainly for the purpose of keeping grave robbers out. As you can see here, this appears to be a couple with a small child. 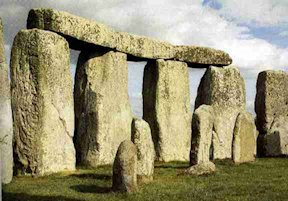 You might not have ever heard of a dolemn or even seen one in a cemetery depending on your experience, location, and travels. The most famous dolmen in the world is Stonehenge.

The word “dolmen” means “stone table” and their use as grave markers dates back many millennial ago. In the most ancient of times, these structures were reputed to be the grave markers of the giants. The second most famous giant from ancient times is King Og. (The most famous is Goliath the Philistine from Gath who was slain by (King) David as recorded in 1 Samuel Chapter 17 of the Holy Bible.) 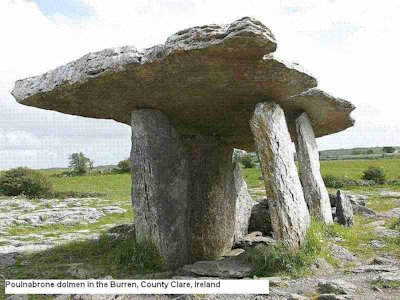 King Og ruled for hundreds of years. By some Rabbinical writings, he was survivor from the Great Deluge by riding on Noah’s Ark. King Og was killed by Moses and the Israelites, as described in Deuteronomy Chapter 3, and he would have been well over 800 years old.

The dolmen became associated with the giants in the ancient times and many of their graves consisted of these stone tables being built over them.

I have seen similar structures, of a much smaller scale, used in Pennsylvania, Ohio, and West Virginia. The grave stone bearing the inscription is laid on top of 4 legs, much like a stone table should be. 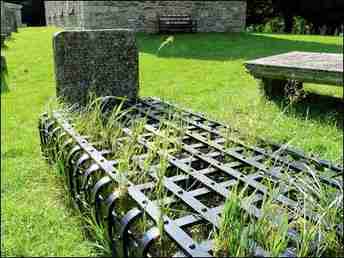 They were done in a much nicer manner than these crude, large objects were.

On the right, here is another mortsafe. Take notice to the right there is a much smaller version of the dolmen but it sitting on two legs that span the width. I have seen them as low as a foot off the ground and as high as a few feet off the ground. When the larger tables were made, a stone slab was laid directly on the grave, the four legs were set, and the stone with the inscription was laid on the top. 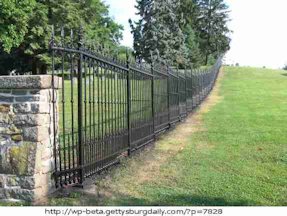 Lastly, there are the good old fashioned fences where they just enclose the entire cemetery. As the saying goes, people are just dying to get in there.

I certainly hope you enjoyed this segment that touched briefly on cemetery security. By no means has everything been covered. There is always so much more to learn. Each culture did things different for different reasons. Some were unmarked, like that of King David, and some were booby-trapped like the Egyptians did for their Pharaoh’s tombs.  Did you know that in 1876 Lincoln’s body was almost stolen right out of his monument? Unfortunately, grave robbing is centuries old. Today, vandalism is more of a problem. The need for cemetery security continues on.

I’d like to encourage you to do more research and reading on your own into anything that you found interesting here.

0 0 0 0
Previous : A Repeat of American History
Next : Dealing With Difficult Questions
Kevin Ralston