Evelyn Francis McHale became more famous after her death than she ever could of imagined during her life. Rather, she became famous because of her death.

On May 1, 1947, this 23 year old lept to death from the top of the 86 story Empire State building in NYC and landed on a United Nations limousine.

Then photography student, Robert C. Wiles was on scene and snapped the picture moments after her landing. The picture became known as “The Most Beautiful Suicide”. 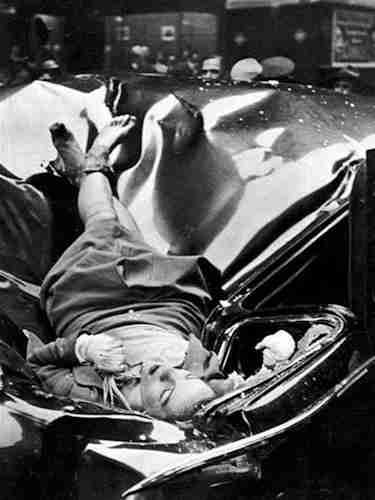 The picture was ran in the 12 May 1947 issue of Life magazine, full page, with the caption “At the bottom of the Empire State Building the body of Evelyn McHale reposes calmly in grotesque bier, her falling body punched into the top of a car.”

She was set to marry  Barry Rhodes, a young 24 year old, the following month but believed herself to be an unfit wife.

She was born 20 Sep 1923 in Berkeley, California and was the second youngest of seven children born to Vincent and Helen McHale.

Her death gained international attention as the photograph was published across the world.
More of her story can be read here on the Codex 99 website.

Since her fateful jump in 1947, visitors to the Observation Deck have reported seeing a woman of her description run through the safety fence and off the edge of the building. Does the spirit of the young Ms. McHale still haunt where she spent the final moments of her life?

The safety fence had been constructed soon after her death to prevent more suicides in this manner. Unfortunately, more have since found a way as recently as 2010 when a Yale Student climbed over the fence and jumped.

Evelyn Francis McHale was a Woman’s Army Corp veteran and soon to be bride who took her life in a tragic way.